Vinaskógur (Friendship Forest) was opened in June 26th, 1990 when two were trees planted - one planted by then President of Iceland, Vigdís Finnbogadóttir; and the other by Her Majesty Queen Elizabeth II. The forest is close to Þingvellir National Park. Tree planting is usually done by visiting heads of states and other dignitaries.  The forest is a symbol of friendship and peace amongst peoples of the world. Since its opening, many Heads of State have planted trees and there are two pillars in the forest inscribed with the names of many Head of State and Dignitaries. Successive Presidents of Iceland are  the protectors of the forest.

In many ways, under the banner of the Iceland Forestry Association (IFA), almost all forests in Iceland are Friendship Forests since they were and are being created by volunteers  with a strong bond of friendship and camaraderie, often working alongside State Foresters (who are also members of the IFA) hence they are in effect Friendship forests”

The forestry associations in Iceland are volunteer organisations, bringing people together through a shared interest in trees and forestry and with the common goal of increasing the forest and vegetation cover of the country.  Anyone can join a forestry association - so one does not  have to be a forester or forest owner to take part - you just have to want to support the common goal. Members are thus from all walks of life, laymen to farmers and professional foresters. The planting done by forestry associations is largely for recreational forests (areas close to towns and cities) and land reclamation forests, that focus on re-establishing vegetation in sparsely vegetated areas (to be used for recreation in the future). The associations work, to various extent, with other institutions and organizations in the forestry sector, municipalities and other governmental organisations, forestry and general farmers, other non-governmental organisations and individuals, depending on local conditions and the project at hand

This page, indeed much of the content of the website, was created primarly to honor the Icelanders,  without whose friendship and generous support this website would not have been created. The primary institutions are Iceland Forestry Assocation (Reykjavík)  Soil Conservation Service (Gunnarsholt), Iceland Forest Service (Egilsstaðir and Mogilsá),  and the Agricultural University of Iceland (Hvanneyri). But, there literally many friends and colleagues in every district of Iceland that have in one way or another contibuted to this website -  such that, if I were plant a tree in the Friendship Forest for every Icelandic friend & colleague, The Friendship Forest would surely quadruple in size!

President Vigdis Finnbogadóttir leading by example the planting of trees 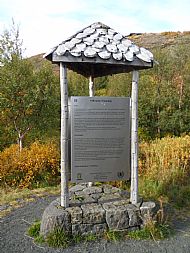 Board describing the goals and objectives of the Friendship forest as symbol of universal peace among all peoples. 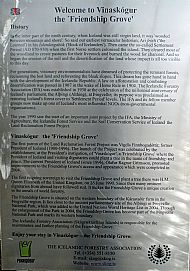 Story of the Friendship Forest

A view from the Friendship Forest of a young, naturally regeneration birch forest which covers much of Þinvellir National Park

Friendship forests are over Iceland many of them planted and cared for by very keen students.
Life doesn't get any better when planting trees to the slow, steady beat of the tune O' Rowan Tree (Reyner) played on the bagpipes. 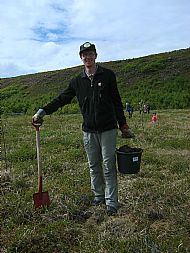 Tireless Einar makes sure all trees survive and grow well when fed with a bucket of organic fertilizer. 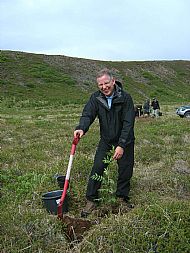 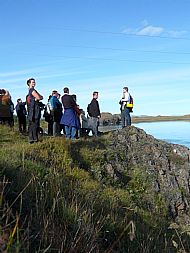 Moving to a new location in new forest

One of many lectures on succesful forests always draws a large crowd of very keen Icelanders. 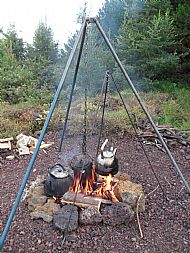 Sæmunder from the Westfjords demontrates how to live and eat well in the forest.

Hákon Bjarnasson and Siggi Sigursveinnson and family at his Family's farm near Vík, south Iceland. Sandy is on the left.

A fine group of tree planters in Dýra in the Westfiords. 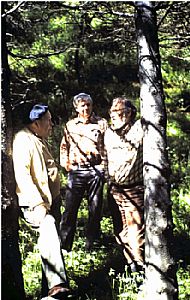 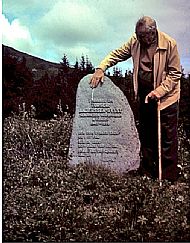 A group of Students from the Agricultural Ubiversity on an outing as part of the Shelter Forest course taught by piper Dr. Robertson 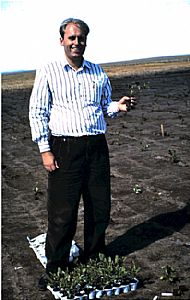 Research Forester Þorberger H. Jonsson was in charge of the plant production and planating of Experimental poplar plantation at Gunnarsholt. 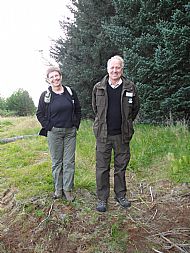 Sigurður Skúlason, chief forester for North Iceland and his wife Margrét - both live and work at Vaglir Forest near Akureyri.

Members of the Iceland Forestry Association on tour of Scottish Forests in 2011 ejoy a lecture from Hugh Clayden, Forrestry Commission at the David Marshall Lodge in Aberfoyle, Stirlingshire 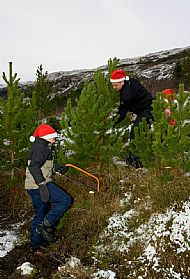 Getting Xmas Trees in Iceland is always a fun time for the family.

Ragnhildur pitching in with the Xmas Tree harvesting 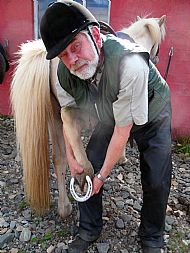 Sandy Robertson on an exceptionally sure-footed Icelandic horse. This by far is the most pleasant way to inspect Jon Loftsson and Family's large young forest plantation

Jon riding through the souther part of his huge new forest planation planted by Jon and his Family.

Núpsdalur, in the process of being forested by a small group of friends resident who in of near the valley.

Birkir the tree planter ready for planting to restore forest i n the valley.

The tune was
The Núpsdalur's Spruce Beer Jig